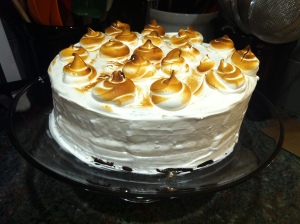 It’s not an actual recipe, and this particular cake was not a crying cake, this was a delicious graham cracker flour, milk chocolate cake with marshmallow frosting (which involved a blow torch) from The Smitten Kitchen Cookbook by Deb Perelman. But as I recipe plan for holiday menus I am reminded to not make a crying cake.

I’ll tell you the story. It was the Christmas of Megan’s senior year of college. She had been dating John Hansen for a couple of years and she was going to spend the Christmas holidays with his family in Portland, OR. I knew this, I had prepared for it and I was ready for it (?). They were planning to drive down early on Christmas Eve but it snowed that morning and the roads were treacherous. They thought about not going and a part of me was happy but then I thought about how much Katy, John’s mom, was looking forward to spending the holiday with them and we had already exchanged gifts and I had prepared myself for this so I encouraged them to go, to take the train down. They purchased last minute tickets, we said our “good byes” and “have a good times” and Jack and Mitch drove them to the train station. I busied myself finishing the Christmas Eve dinner preparations as we had guests arriving in a few hours. I was making a cake from a Giada cookbook, Hazelnut Crunch Cake with Mascarpone and Chocolate. I had baked the cake layers and frozen them, so all that was left was the frosting and then the hazelnut candy on top. That’s right, hazelnut candy. First of all, hazelnuts are a pain in the %^&# to skin. You have to roast them and then rub them in a dish towel, creating a mess everywhere. Then I had to make a sugary concoction which seemed from the instructions to be easy–no candy thermometer, no scary words like “hard crack”, just boiling the sugar for about 8 minutes until it is light brown, pouring it over the nuts, chilling it, breaking it into small pieces while saving some bigger shards to decorate the top. My first attempt was a sticky mess, my second (after skinning more hazelnuts) was no better, which was when Mitch and Jack came home and I was in the kitchen, crying. The tears were not just about my frustration over the candy failure, obviously. I had done what you should never do when you are entertaining. I had gotten myself in too deep–it was too much. Maybe on a normal day, it would have been fine but I had not factored in the emotional quotient. And the holidays are never emotional, right?

So, as you plan your holiday menus, don’t make a crying cake. Know your limits–whether that be time, skill level or your physical and emotional state. If you’ve been living on little sleep trying to get everything done, you might not want to attempt a Bee Sting Cake from Smitten Kitchen (I really, really want to make this). If a recipe looks like it might be a crying cake, take the time and spend the money to try it out in advance. Think about the day, what your end goal is. Mine is good food, a nice party (where I don’t look like I’ve been crying) and time preparing with those I love.

To end the story, Jack make the hard crack hazelnut candy (he has the candy making gene) in one attempt, I pulled myself together, we threw a great party and I learned a valuable lesson, actually I learned several! Now, off to pare down those menus…

A picture from the cookbook because if you go on line for the recipe it appears people were smarter than me and did not attempt the candy shards!

One thought on “Crying Cake”