Spring has finally arrived here in the Boston area! It was a cold and snowy winter, but the sunshine, warmth, blossoms, and leaves have finally arrived. So has the rhubarb.

Here in Cambridge, I’ve had my eyes open for rhubarb at the various grocery stores, but have been disappointed by either its absence or its pallor. I’ve also been disappointed by the fact that I have to buy it at all, since last spring I could just have my mom cut me a pound…or ten (check out the photo below). Such is the price of city living. 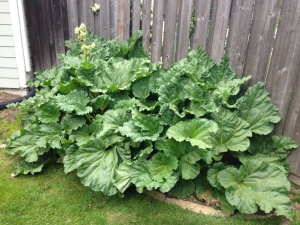 However, I was able to find some lovely, vibrantly-hued rhubarb at Market Basket this past weekend. My next task was to figure out what to make. This was a challenge not for a lack of recipes, but precisely because there are so many good ones out there! I spent an hour (or so…) googling through recipes. Instead of replicating this search each spring season, I thought I’d take the time to organize and post them here.

Made by one of us:

rhubarb upside down cake – made this several times, it is a great way to show off really red stalks.

lemon buttermilk rhubarb bundt cake – made this several times, it has a pleasantly tart flavor from the lemon, and I like it more with just powdered sugar instead of with a glaze. This is what I ended up making, by the way! It is an easy one to bring into work.

rhubarb pie with orange zest — this is my favorite pie ever.

rhubarb syrup with rosewater – it turns out I’m not the biggest rosewater fan. If you like it, you should make this, or just use a tiny amount.

rhubarb crisp a la mode with strawberry sauce  Stephanie said, “Very tasty–first rhubarb recipe I tried that I liked and wanted to make it again. Has white pepper in it which adds a nice twist.”

vanilla-roasted rhubarb and strawberries – Stephanie made this and said it was delicious, but I didn’t get to try it — this will probably be my next attempt!

rhubarb and raspberry crostata – Steph made this, I did get to try it, and will thusly vouch for its deliciousness.

rustic rhubarb tarts with corn flour – Deb Perelman’s tweaks to Kim Boyce’s recipe from (the amazing) Good to the Grain. The tender dough breaks apart very easily — make sure to have plenty of all-purpose flour on the counter and your hands. Now that I’ve tried the compote with a vanilla bean, I’d like to try the original version with hibiscus.

rhubarb hamantaschen from Deb Perelman’s own amazing book, The Smitten Kitchen Cookbook (this isn’t the link to her blog here, though — and again, I haven’t tried this, but thought I’d link with that caveat and the plug that if you buy Deb’s cookbook, you won’t regret it!).

And yes, this is just part 1. Stephanie and I had so many rhubarb recipes to share, they couldn’t all be rounded up in one attempt.  Here’s to many more iterations of sweet (and savory) rhubarb creations! -Megan